The philosophy behind the Rare Books Department has long emphasized the importance of the book as a physical object. Some of the most meaningful interactions with our collections occur in the classroom, where students are able to hold history in their hands. We extend our reach with a series of virtual lectures — part of our commitment to provide reference, research, and educational access for students, faculty, and community members. 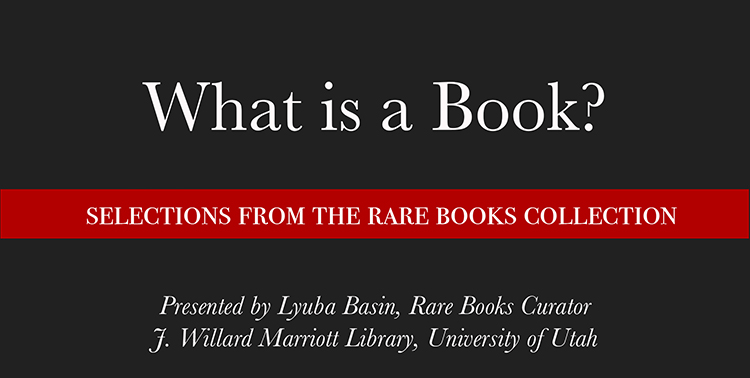 WHAT IS A BOOK?
An exploration of the object we call the "book" that answers questions you never knew you had. What is a book? Where did it come from? Why does it look the way it does? And finally, what will happen to the book when we all go digital? 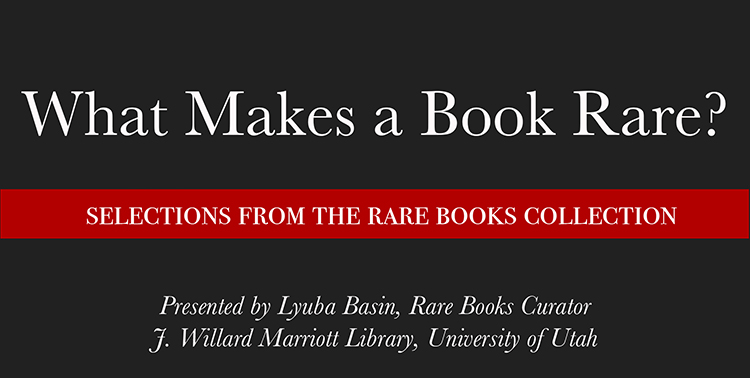 WHAT MAKES A BOOK RARE?
A look into some of the criteria that determine what makes a book rare and how the Marriott Library gets its rare books – featuring examples  from our strongest collections. 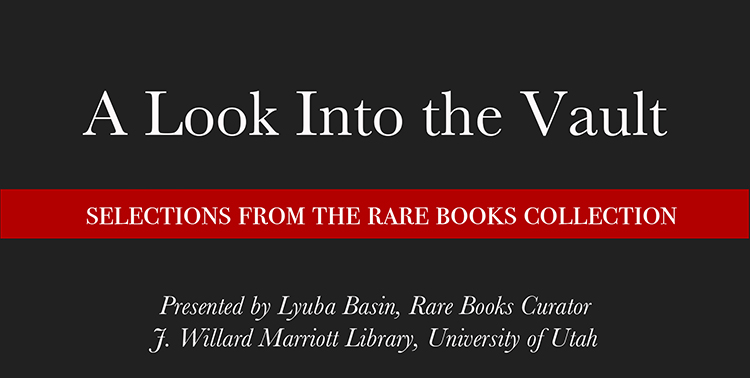 A LOOK INTO THE VAULT
Learn how you can take advantage of the rare books collections for research and reference. Whether you’re exploring new digital resources — or you’re still interested in good, old fashioned books — we have something for you, regardless of what you’re studying. 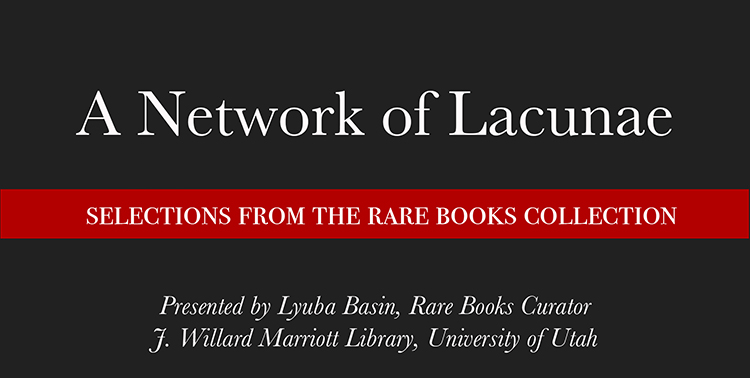 A NETWORK OF LACUNAE: A VIRTUAL HISTORY OF THE BOOK
A brief history of the book which explores how literary networks can spread across time and space — from early Babylonian writing systems to 21st century artists books. 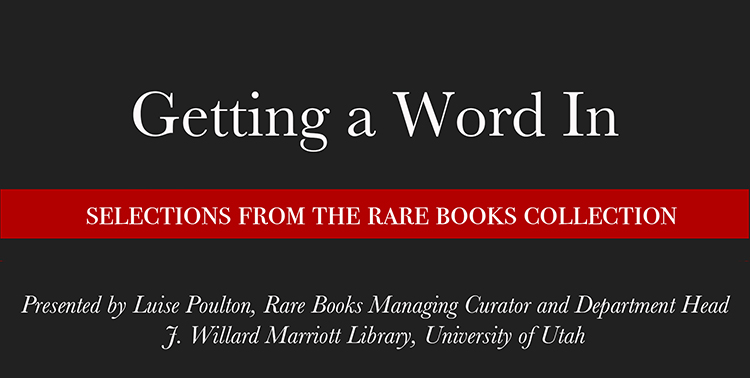 GETTING A WORD IN
An introduction to "Social Media." From 4000-year-old receipts on clay to handmade personal prayer books to lavish scientific game-changers to travel guides published on fragile paper — the written word and the physical form in which words are stored are social constructs creating relationships between writers, makers, readers, space and time. 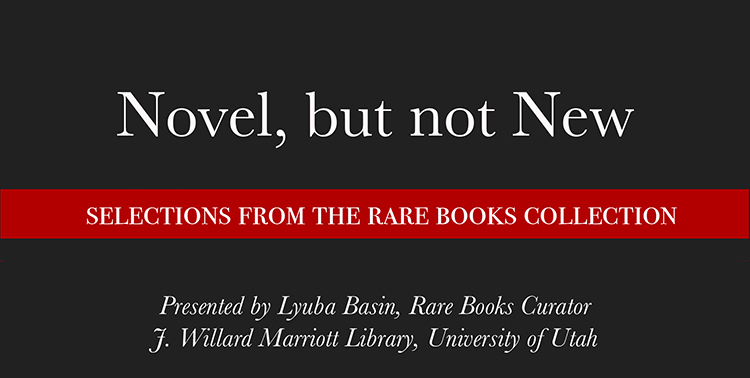 NOVEL, BUT NOT NEW
From the ancient Greek novel to the chivalric romance and the emergence of the picaresque, the novel has relied on a multitude of writers, interactions, initiatives, and innovations. The history of the novel was never arbitrary, but rather has been dependent on expressing the ever-evolving human experience. 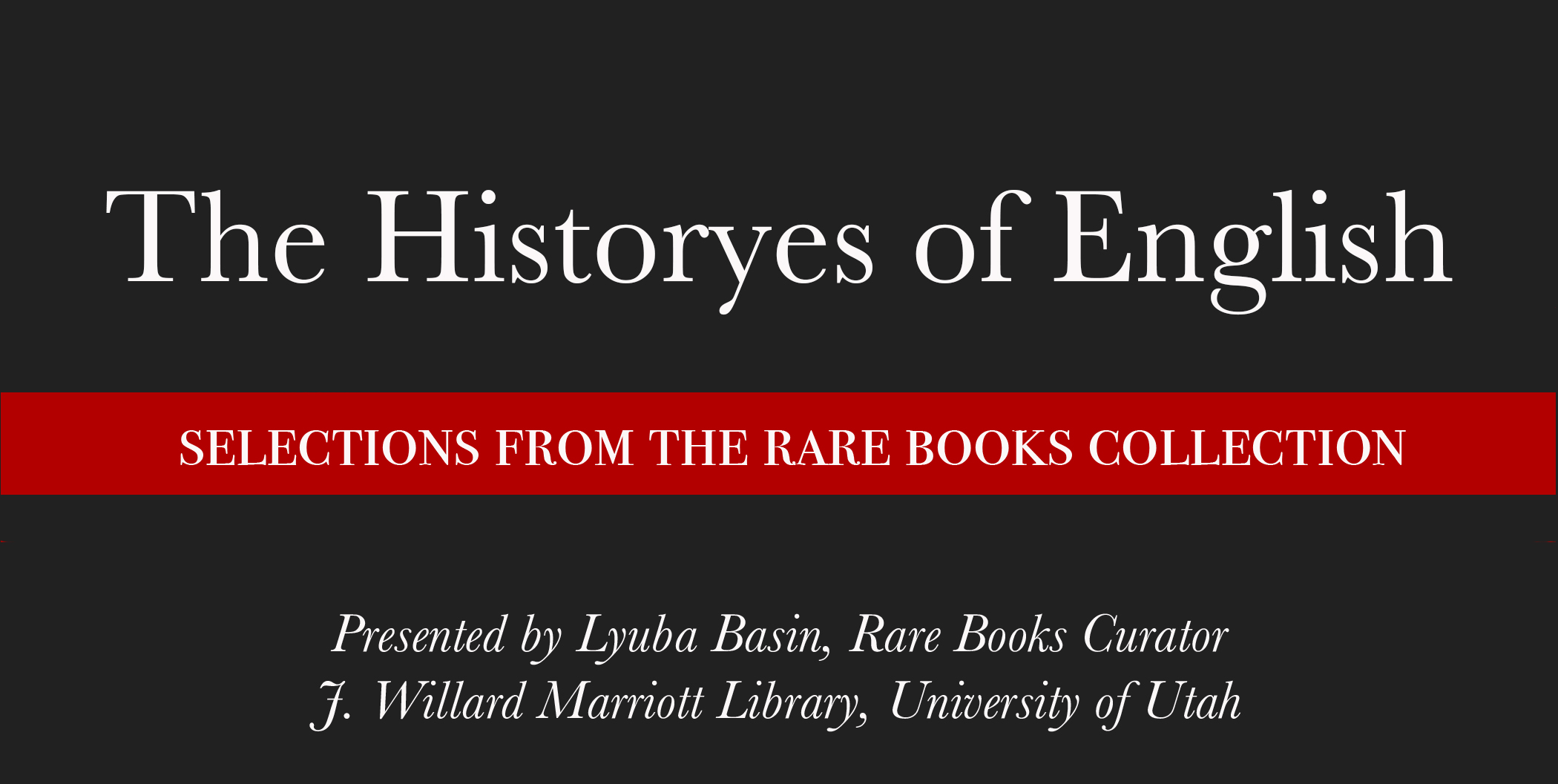 THE HISTORYES OF ENGLISH
Trace the history and evolution of the English language with examples from early illuminated manuscripts to twenty-first century artists' books. Learn about the integration of Irish, Anglo-Saxon, and Germanic cultures and gain insight into the linguistic diversity of English in the United States. How will our English histories evolve? 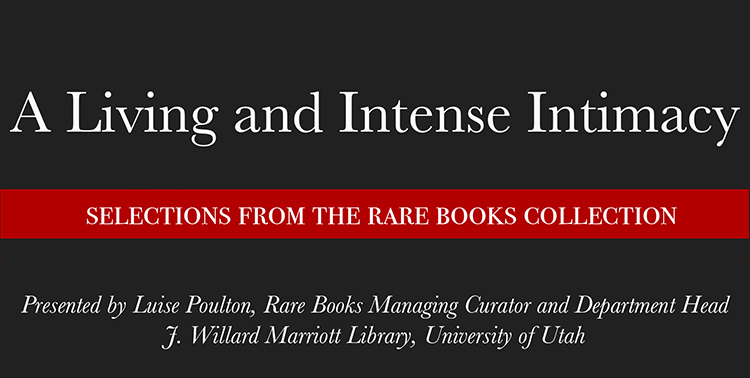 A LIVING AND INTENSE INTIMACY
An exploration of early manuscript book design and its lasting influence on printed books, which continues to this day. Although new technology changed the way books were produced, the general purpose of books remained the same: a conscientious determination that the written word was accessible. 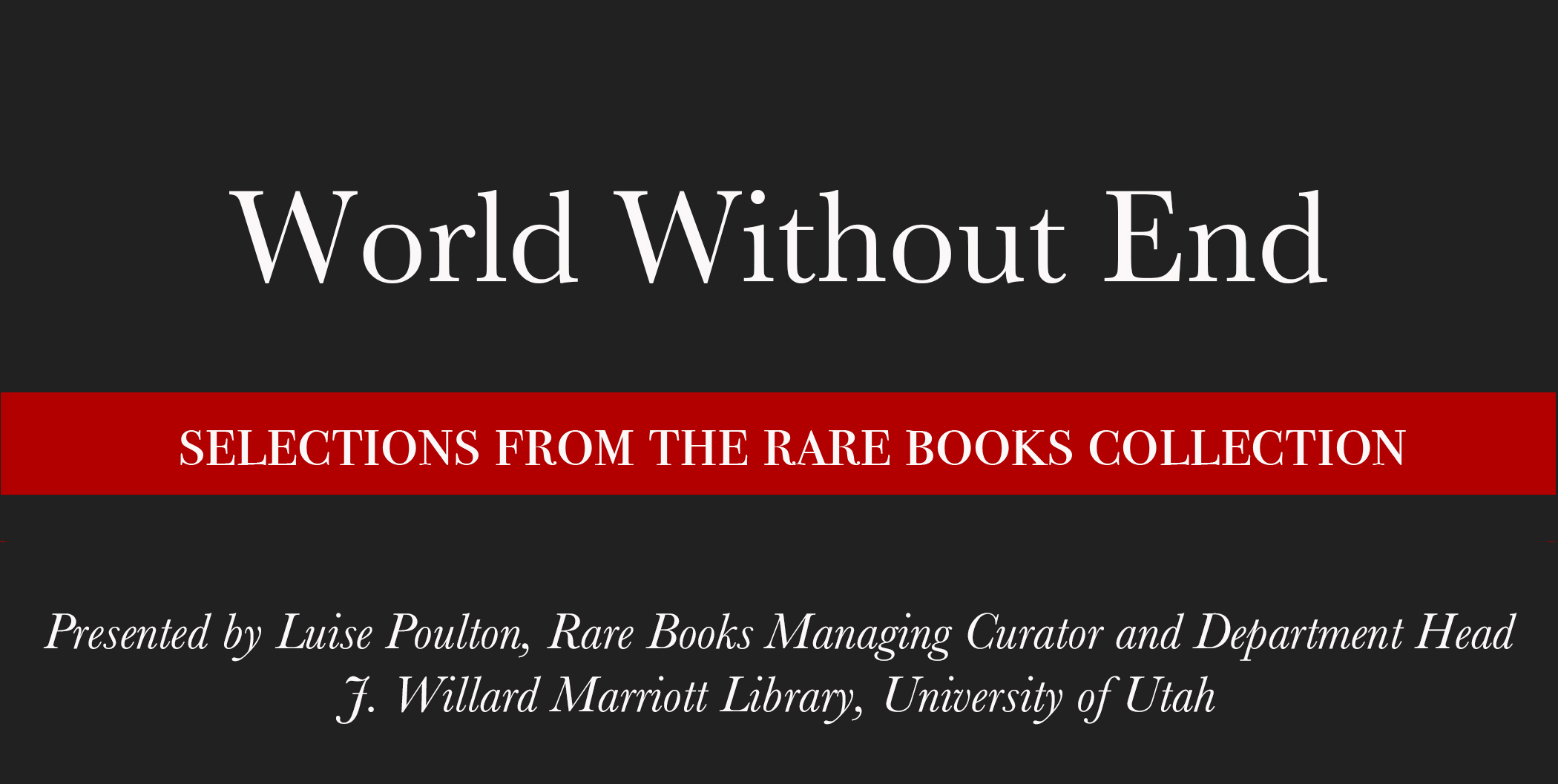 WORLD WITHOUT END: FROM MACROCOSM TO MICROCOSM
A literary journey through the early Middle Ages to the early modern era looking at the revolutionary changes in the way the universe was understood and the intense debate that took place about the nature of God and the nature of man. 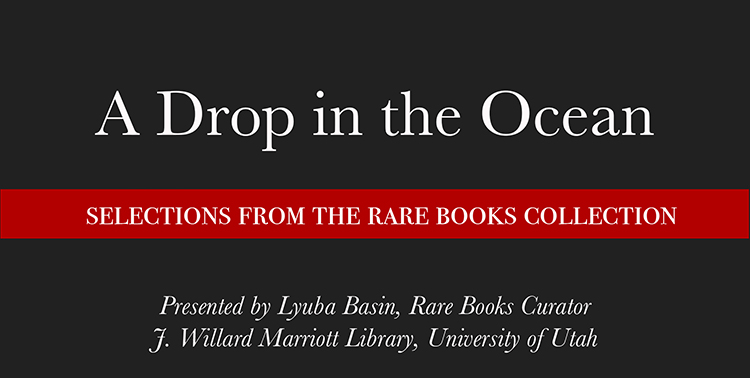 A DROP IN THE OCEAN
Learn about the literature of oceanic exploration — from books about maritime laws, scientific observations, and harrowing narratives of adventures, to pirates, polar expeditions and privateers. These books have traveled by hand, and across the seven seas! 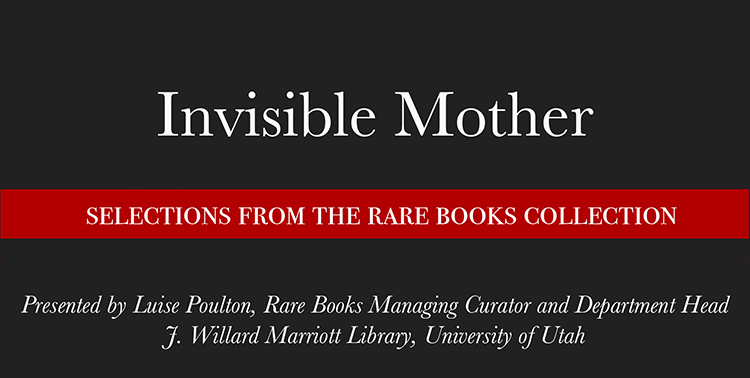 INVISIBLE MOTHER
Women have found a diversity of ways to engage in the production of knowledge. Women have been both subjects and practitioners of science for centuries, although recognition of their influence in these spheres has been limited. Their particular experiences have shaped and improved scientific practices and outcomes. The books we consider in this lecture, from the 16th to the 21st centuries, belie the belief that science was outside of the social norms of womanhood. 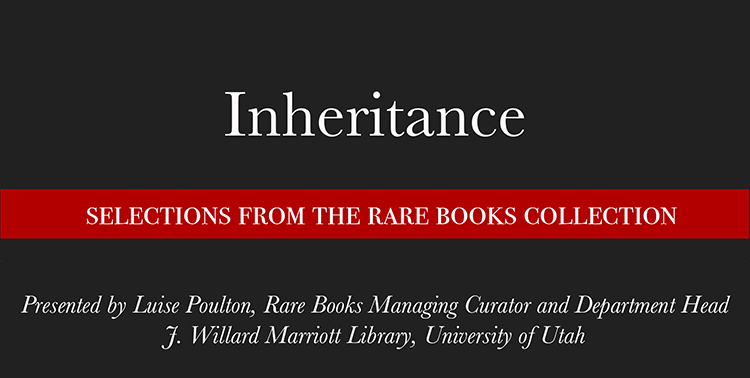 INHERITANCE
Discover thirteen books from the seventeenth through the early twentieth centuries representing European scientific, political and literary attempts to understand the universe and humanity's place within it. 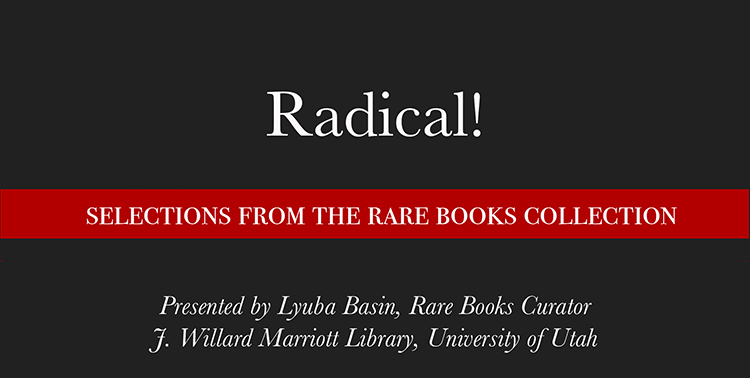 RADICAL!
Discover what it means to be "radical" through a retrospective of twentieth century dissent and the literature of politics — from poetry to pamphlets and novels to newscasts. 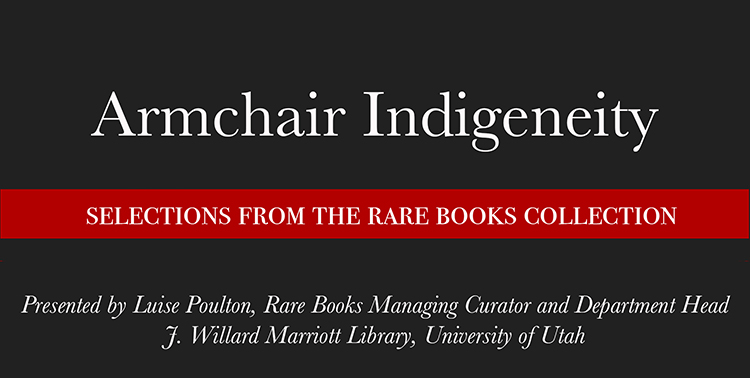 ARMCHAIR INDIGENEITY
A look at writings by and about indigenous peoples in Mexico, reflecting on some of the consequences of conquest, and attempts to recover an identity lost and then reimagined. 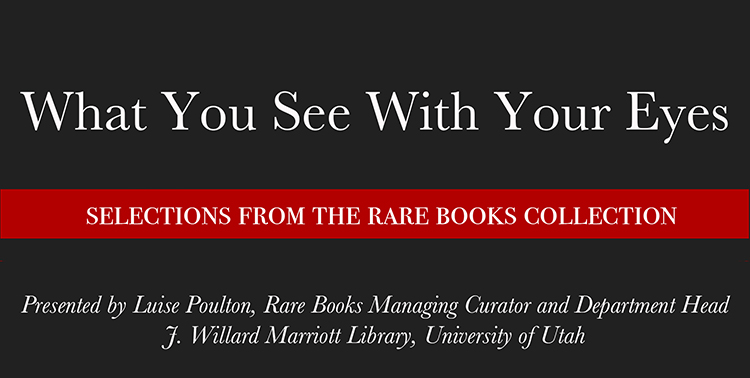 WHAT YOU SEE WITH YOUR EYES
Explore early books in Nahuatl and Spanish and develop a sense of studying past texts in their physical form as a way to enhance textual anaysis. 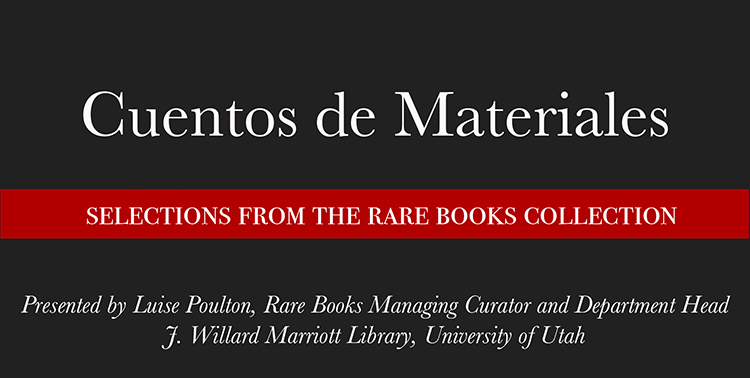 CUENTOS DE MATERIALES
An introduction to artists’ books celebrating the Spanish language and Hispanic, or Latinx, and Chicanx culture. 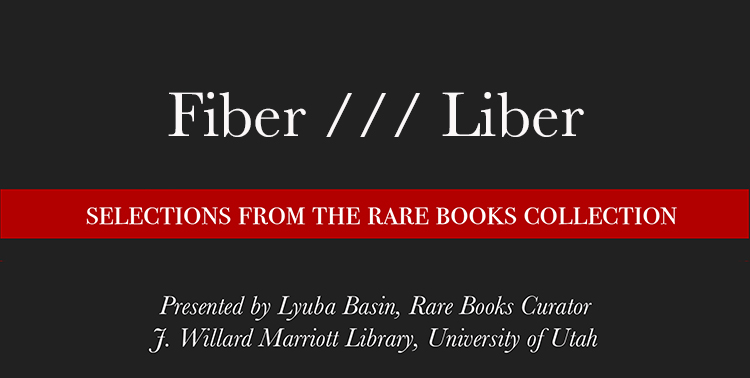 FIBER /// LIBER
There is a clear etymological root between the words text and textile. We can trace it back to the Latin verb, texere — meaning "to weave." From handmade papers to sewn bindings and cloth covers, the book is the perfect example of the interwoven industry of textiles and text. 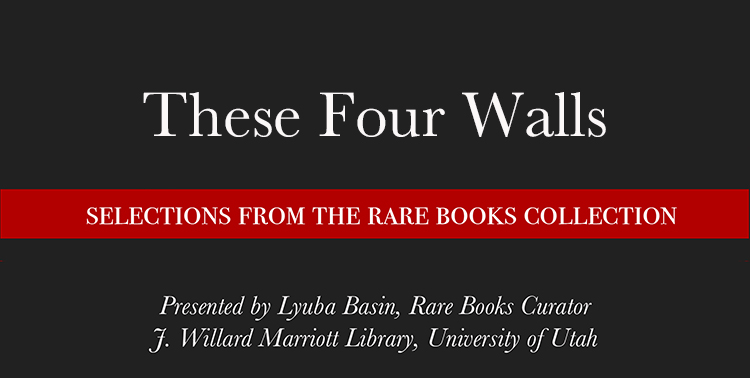 THESE FOUR WALLS
A selection of works that highlight the book as architectural object — from the construction of the page and the scaffolding of language, to the use of type, furniture, rules, bars, and bullets. For a book architect, the pages of a book are empty rooms to build out and furnish, and inside these four walls there exists a limitless space across various axes. 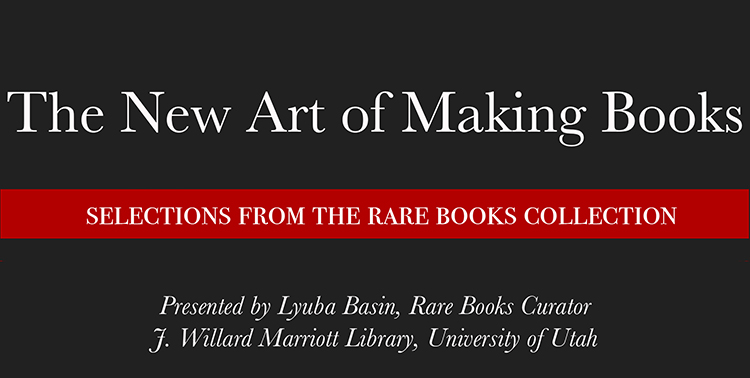 THE NEW ART OF MAKING BOOKS
Definitions and descriptions about the artists book, its structure, and other components related to its production. This lecture uses book terms found on the website Opening Artists Books, a collaborative project established by the J. Willard Marriott Library’s Book Arts Program. 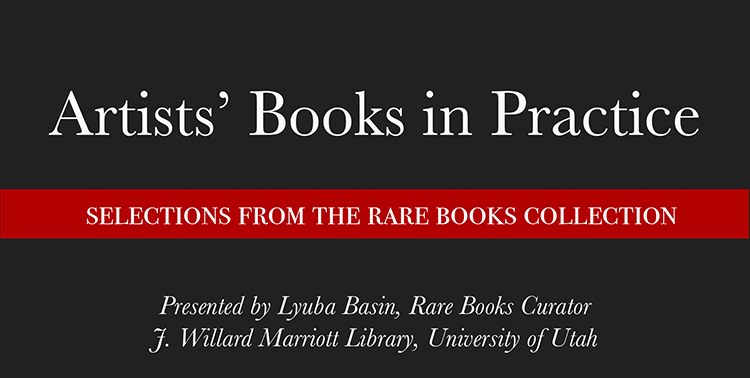 THE ARTISTS' BOOK IN PRACTICE: A RARE BOOKS GUIDE TO...
A simple, step-by-step guide to help transform your creative writing into an artist’s book, featuring examples of artists’ books found in the rare books collection... [References]

For help with Rare Books, please contact us by email. We are happy to assist you in any way that we can.

Appointments must be made a minimum of 48 hours in advance. Appointments are available in two hour blocks:

For more information and to schedule an appointment, please visit the Special Collections webpage.